The Giants Cup Trail has been a route I have used for training purposes for a number of years now. You can cover a lot of distance in good time, and if something goes wrong, most of it is covered by phone signal and there are numerous bailing options.

After the MCSA Mountain Challenge for 2018/2019 turned out to be rather popular, it was decided that the event should be run again for the KZN Section Centenary. I decided to go with the Giants Cup Trail as a day hike for event 1.

On the Friday evening, we drove 4 cars to Bushman’s Nek and came back to our accomodation for the night, Mkomazana Mountain Cottages, where we spent the night.

On Saturday morning, 3 others drove up and joined as at the start. We had three drivers, who would move the remaining three cars to the finish line, and pick up the individuals doing the half route at half distance. This also meant that if anyone wasn’t coping, they could bail at Cobham.

At 6:07am we set off from the start sign. The group initially stayed close together, although I knew everyone would become more spread out as the day progressed.

We were treated to sunrise over the Giants Cup just before we descended to Ngenwa Pool. 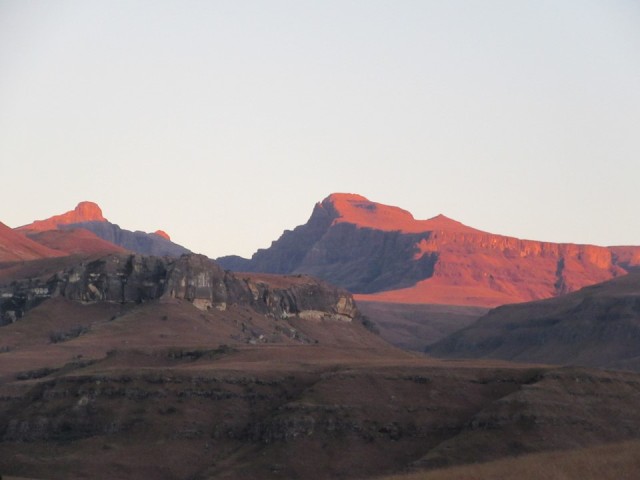 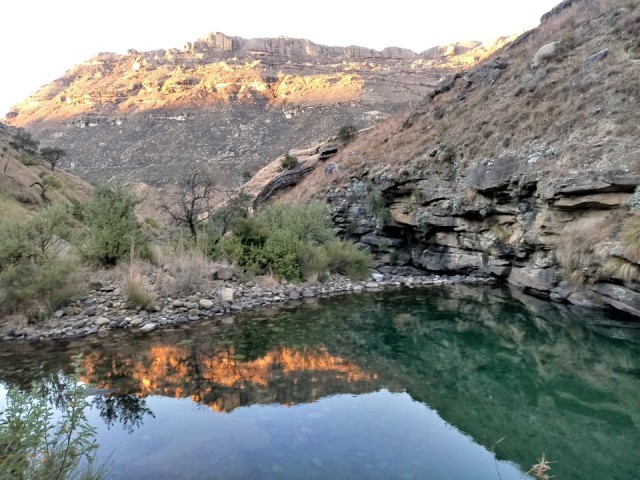 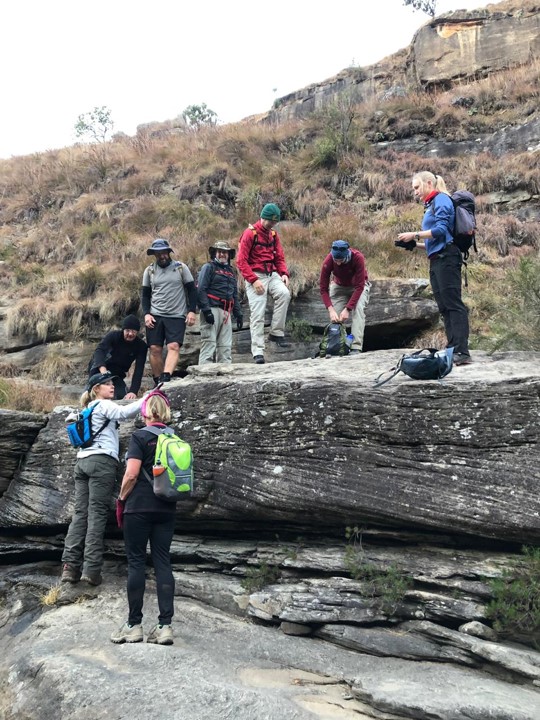 We walked into a frosty Cobham Camp around 2h45 in, so we had made very good pace on day one of the trail. I had a brief chat with Rikki, who is in charge of the MCSA July Camp, ongoing at Cobham at the time. She offered me some coffee – but as per the rules I had set myself for the day, I had to be unsupported, and thus turned it down.

A few of us tagged Pholela Hut before commencing day two of the trail.

We saw a few eland on the Tortoise Rocks hill. And as usual, day 2 went off easily – being the shortest and easiest day of the trail.

We stopped for a short break at Mzimkhulwana Hut before heading off onto the first big hill of the trail. 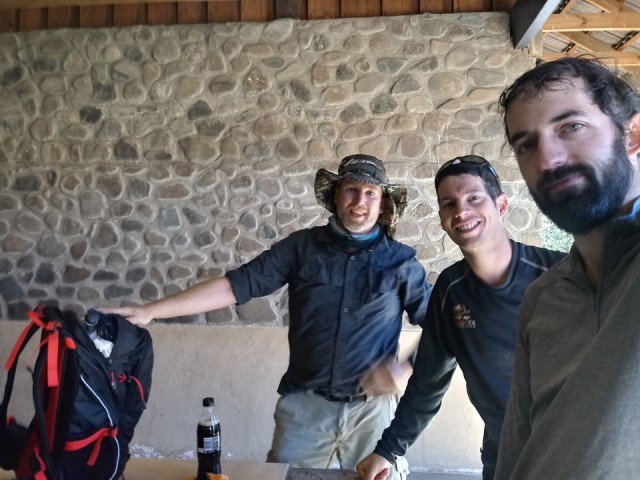 Bamboo Mountain is where the Giants Cup Trail starts to get real – you are almost halfway, but it is a big long hill that kind of never ends. We saw a jackal buzzard on the way up.

Crane Tarn was surprisingly full for winter – I actually don’t recall ever seeing so much water in it.

We proceeded down the hill to hit the tar road. The least interesting 2km of the trail isn’t the easiest 2km, as one might think. Pace is fast, but the downhill section is very steep.

At the turnoff to Castleburn Lake, we found our drivers waiting with their cars. Bruce wasn’t feeling too well and decided to call it a day. Sharon and Dillon came in a bit later and also called it a day at this point, although that was their plan from the start.

We had lunch under a tree by the side of the road before starting up the small easy windmill hill. 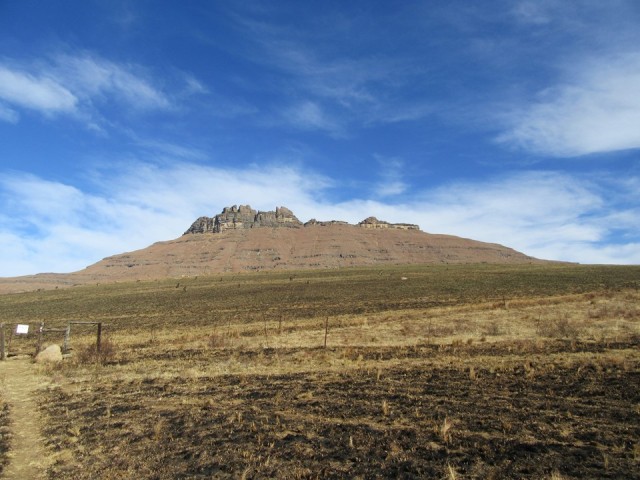 Knowing there wouldn’t be water for a while, we filled up at Wintershoek Hut before heading up Black Eagle Pass.

Black Eagle Pass always feels like it will go on forever, yet it ends rather unexpectedly and is followed by a traverse on top of a ridge. The top of this pass is the first time you reach 2000m in altitude on the trail. 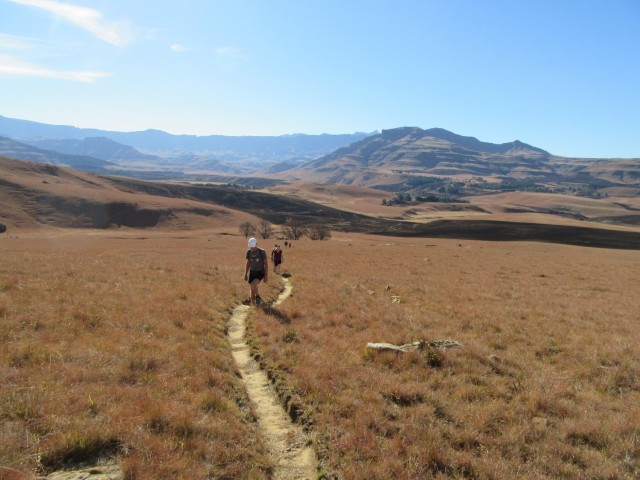 The top of the ridge is usually rewards you with spectacular views of the Southern Drakensberg – but at 3pm in July, you just get a faceful of sun. But no problem, we continued along. 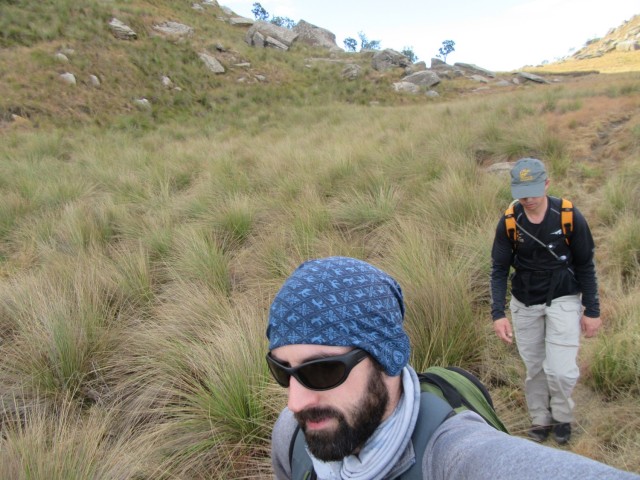 Darran and Richard had decided to run the route, so we hadn’t seen them for a while. But the remaining six of us had been fairly close together until Black Eagle Pass. Richard and I decided we would detour to Swiman Hut, while the rest had decided to push straight to the finish. Swiman Hut is a 3km detour on easy ground and is technically part of the route, but is ignored by most people doing the route in a day. To avoid falling behind, Richard and I pushed ahead at good pace. 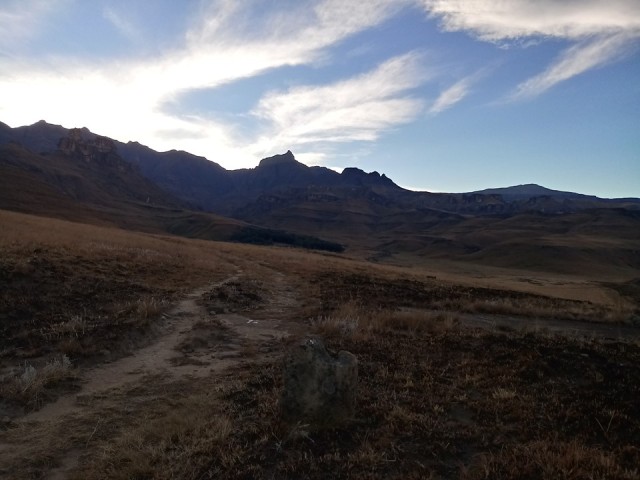 We hit Swiman Hut around sunset, and spent a few minutes at the hut before heading out again.

As we approached the Mzimude River, we were unsure of exactly where the others were. It seemed logical that they would be ahead of us, but we saw no headlamps. I wasn’t worried as it was an experienced team.

We took a short break at the Mzimude River. I also got some sweets out – something to power me up the final hill, which is incidentally the highest and hardest hill of the trail.

This hill goes on forever, but luckily I have done it so many times that I knew how much we had left. We eventually saw four headlamps in the distance, and knew the others were continuing their march.

The final hill eventually relented and we started the long descent into Bushman’s Nek. I always forget how long this hill is.

I wasn’t feeling too well, perhaps that large quantity of sugar to power me over the hill was a bad idea, or maybe a 60km day with 2.1km in altitude gain and loss is difficult – probably a combination of the two.

We tagged the Ezemvelo offices at 8:40 – giving us a time of 14h34 (give or take a minute). I had to chuckle – I had equaled my fastest time on this 60km route to the minute! The finish line shot wasn’t great – but I looked about how I felt, so I decided not to have a second go at taking it.

Overall it was a great day out. I am very impressed with how fast the team was – with Richard and myself being the last to come in.

Overall a great day out!

Thanks to everyone who joined, especially our three drivers!

← Giants Castle via Sherman’s Route: through the fire and the flames
Cathkin Peak →