We arrived in Kota Kinabalu to a bit of drama. The lady at passport control was convinced that South African need a visa to enter Malaysia. Even with her supervisor confirming that I didn’t, and the fact that I had entered the country just a few days earlier without trouble – it took a good ten minutes to get cleared.

Once we were through, we found some water for sale, Matthew converted his cash into ringgits and we found a taxi to take us to Borneo Backpackers. The city was very busy due to a night market happening just up the road from where we would be staying.

We were both hungry, so we went and found some burgers at the night market and after a long delay in making them, we ate them on a bench near the market. 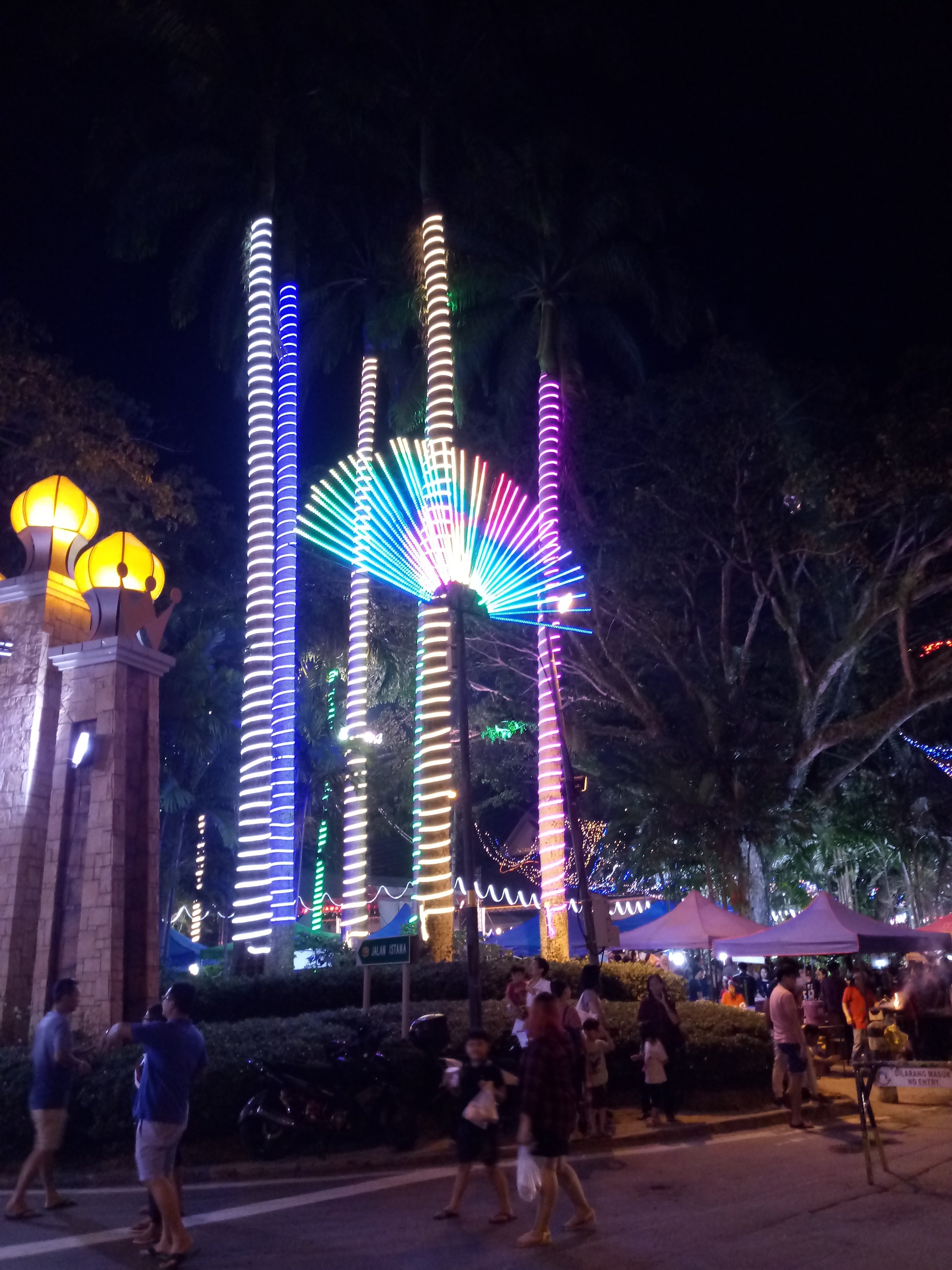 Borneo Backpackers had made a mess up on our booking, so we didn’t get our own room but rather had to share with a stranger. Seeing as it was just one night, we didn’t bother complaining.

We got our bags ready, and by about 10pm, we were both in bed.

The alarm went off very early, as it had to, and soon we were in a fairly full minibus on our way to Mount Kinabalu. Seeing the mountain for the first time, it is notably enormous and very steep. If we knew it would be one of the very few times we would see it, we probably would have taken more note of it. 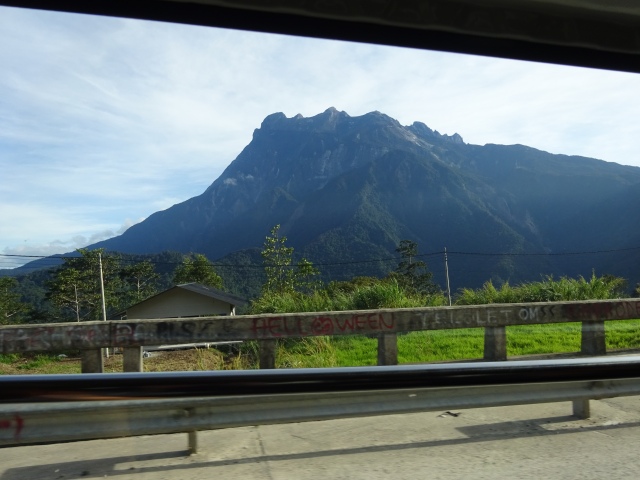 We arrived at the park, got our name tags and had our guide assigned to us. Clarence would be our guide for this one.

There was a sign at the start with the speed record on the peak: 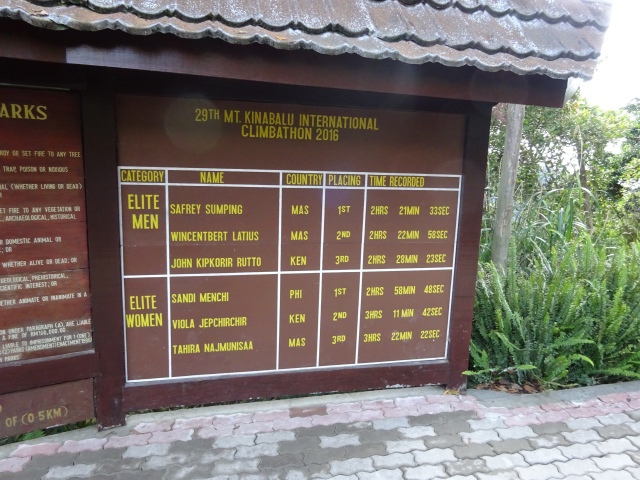 We were driven another 4km up the road before we started along on our way. Almost immediately there is a warning suggesting that you race through the first section due to risk of landslides. This was our first of many reminders – we aren’t in health-and-safety childproof country here, this is Borneo. 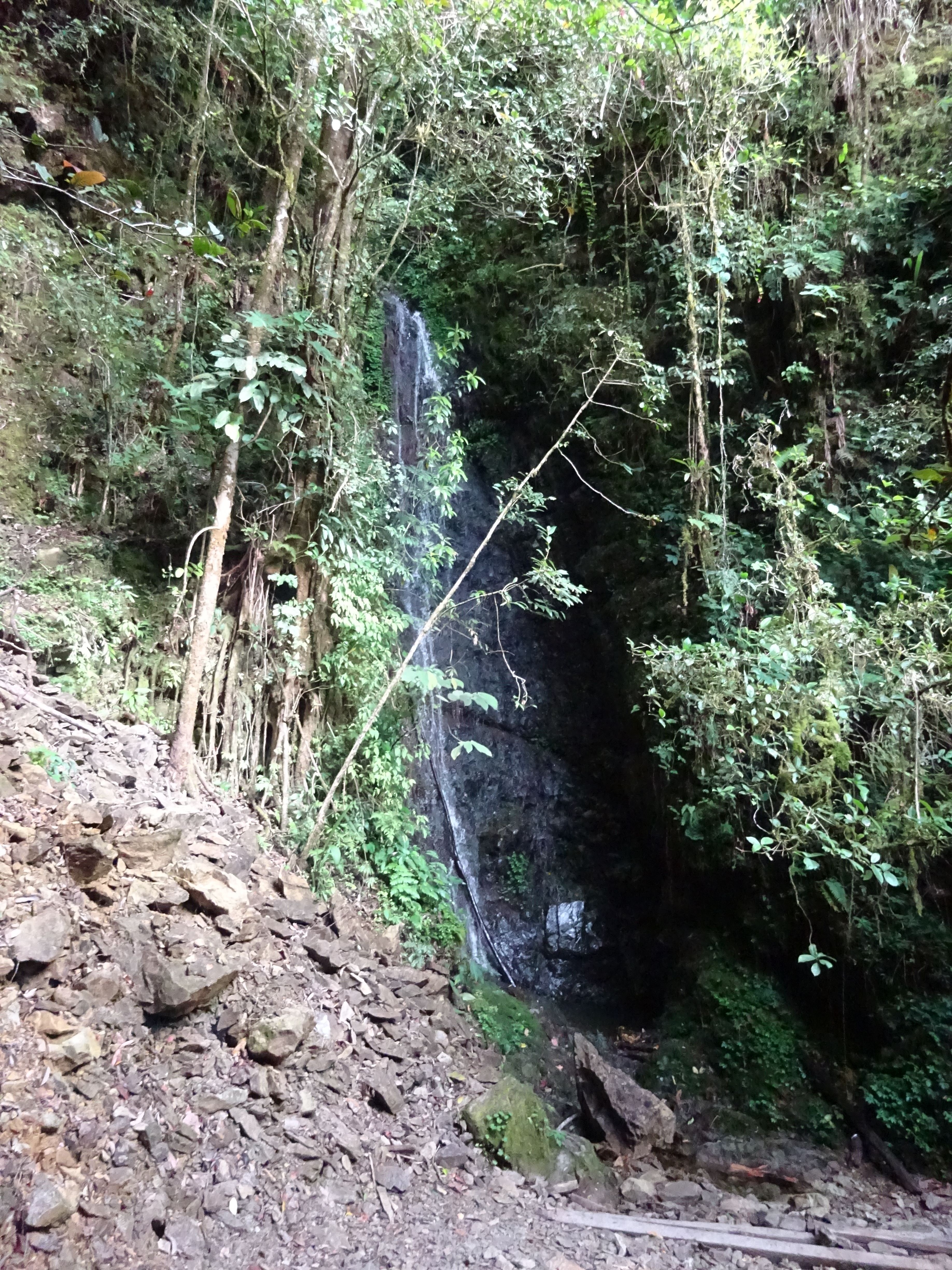 The trail is best described as “17 500 steps to the summit”. To reduce erosion – the trail has mostly been made into steps. It is surprisingly steep, but with the steps, it makes for very doable terrain. 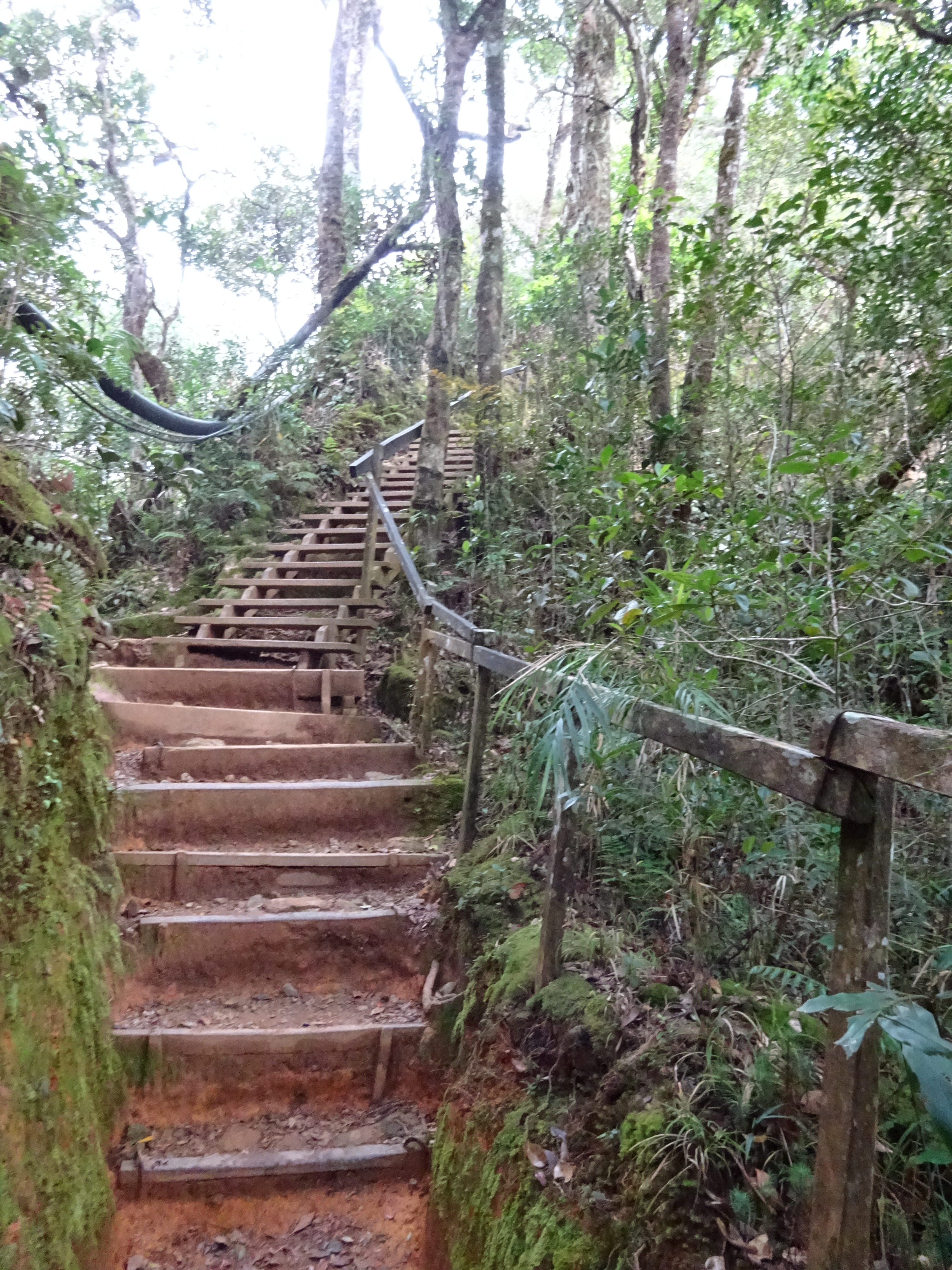 Every kilometer or so, there is a small shelter with some seating and a toilet. You aren’t allowed “using the bushes” on Kinabalu, so this comes in handy. 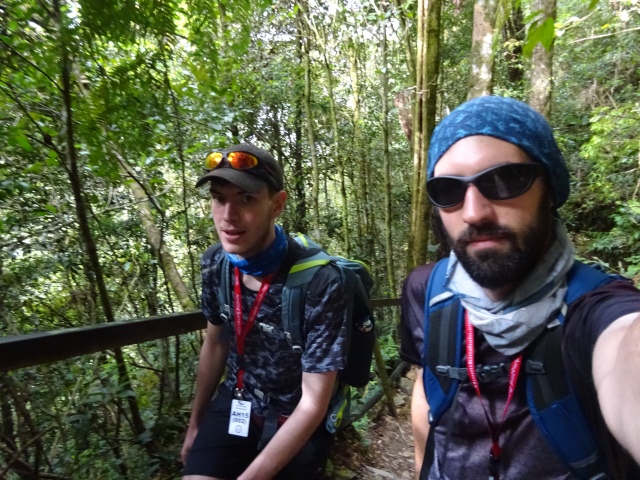 The shelters all had squirrels. Annoyingly people had been feeding them, so they are far too comfortable around humans. If you tried to take food out near them, they would jump on you and try to take it. We eventually started having our food breaks between shelters to avoid them. 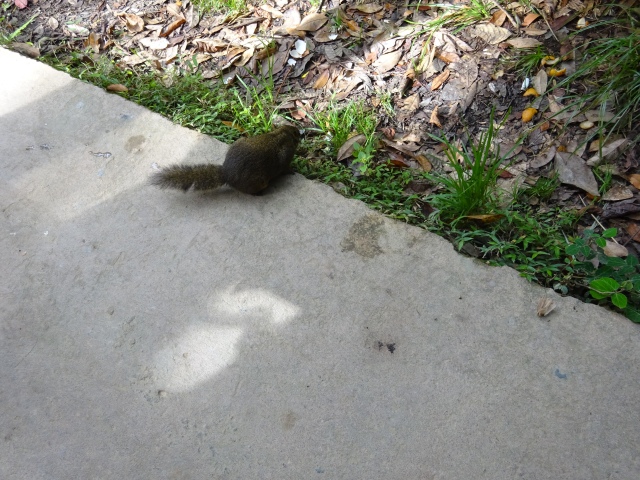 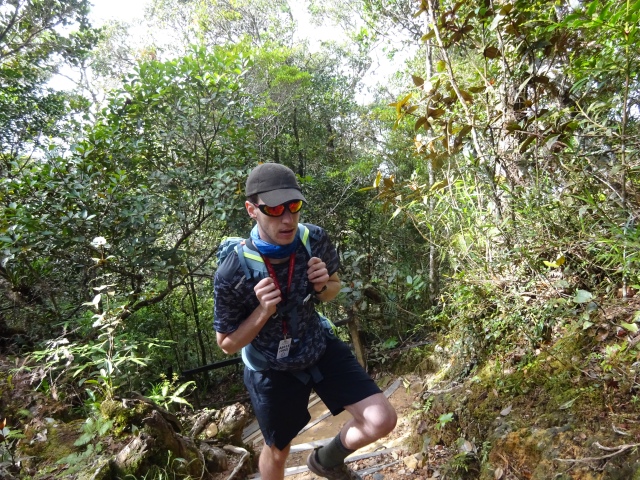 The packed lunch they gave us wasn’t particularly amazing – so we didn’t have high hopes for the food on the route at this stage. We would subsequently learn that this was the only half-hearted meal of the hike. 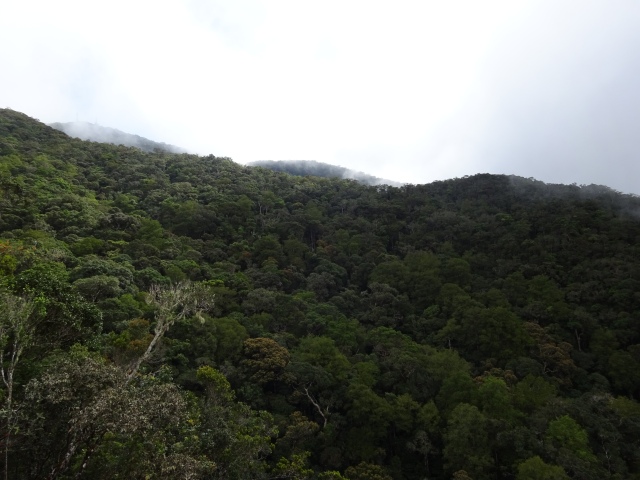 Around midday the mist came in. It seems this is normal for the area. 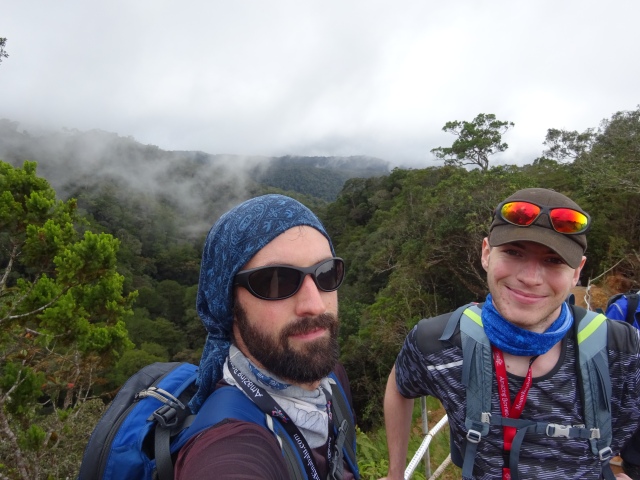 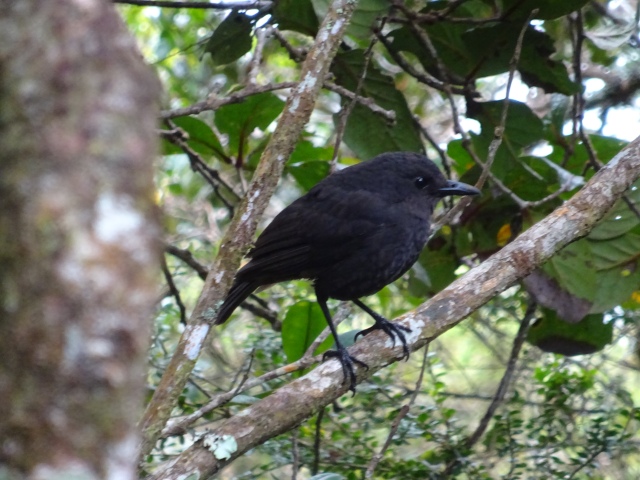 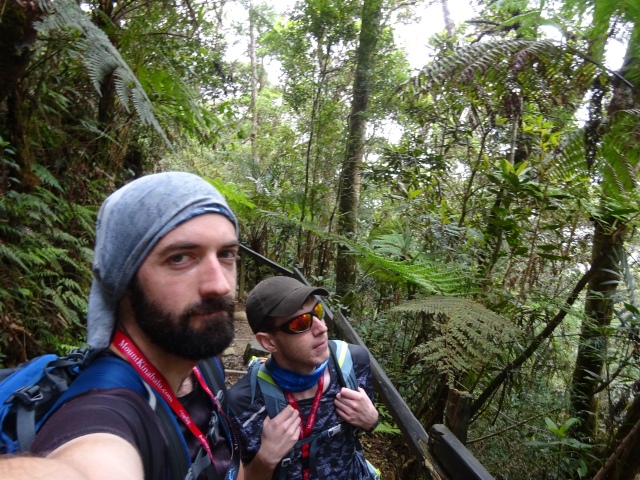 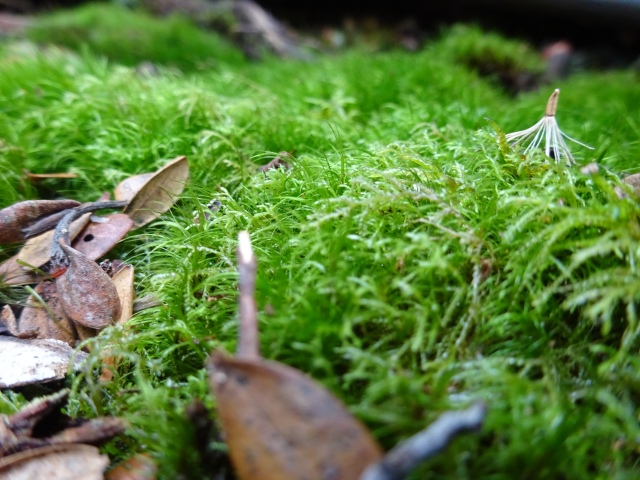 We had a bit of rain as we neared the hut. 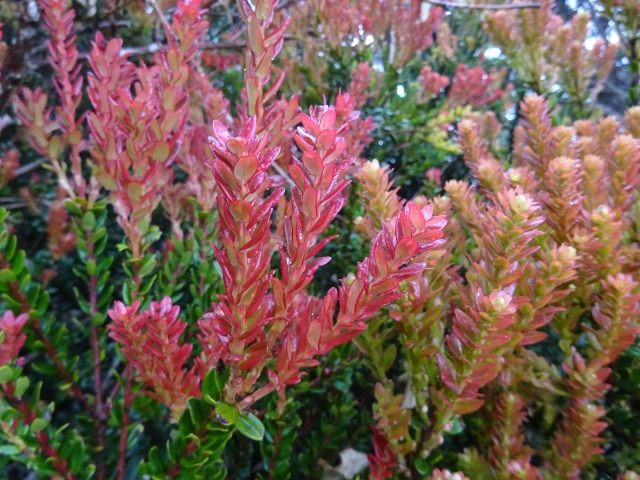 We reached Panalaban around 2:30pm. 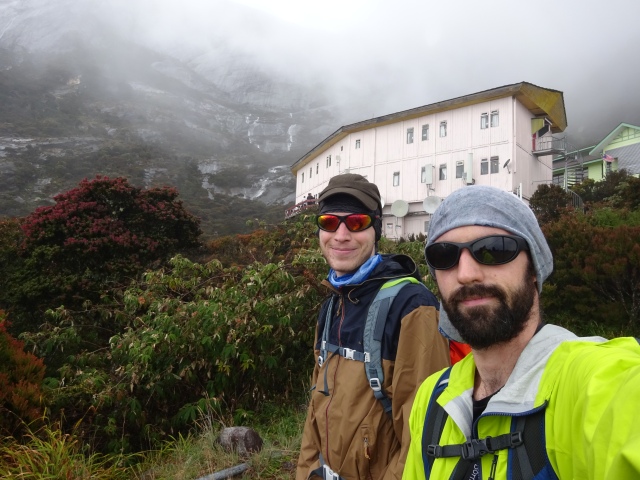 Because this was a busy weekend, we had ended up booking one of the nicer rooms. This meant we had our own bathroom and a private room. Matthew went straight for making sure the bed was comfortable!

At 4:30pm, I woke him up for supper. Clearly we weren’t the only people who were hungry, and thus we had to wait in a fairly long queue. The food was plentiful, and the black pepper lamb was exceptionally good – one of the nicest plates of food I have ever eaten. Perhaps I was just very hungry.

Clarence informed us that we needed to be walking at 3am. I was going to suggest a later start as I knew this would be cold, but he mentioned that we had to reach the checkpoint before 5am, so I decided against this suggestion.

Without any form of alarm clock, I spent a lot of the night trying to figure out what time it is. At 2:15am we were up, and soon we were eating breakfast.

By 2:50am we were on the trail. We weren’t the first to start, but we found ourselves passing a lot of the other groups along the way. 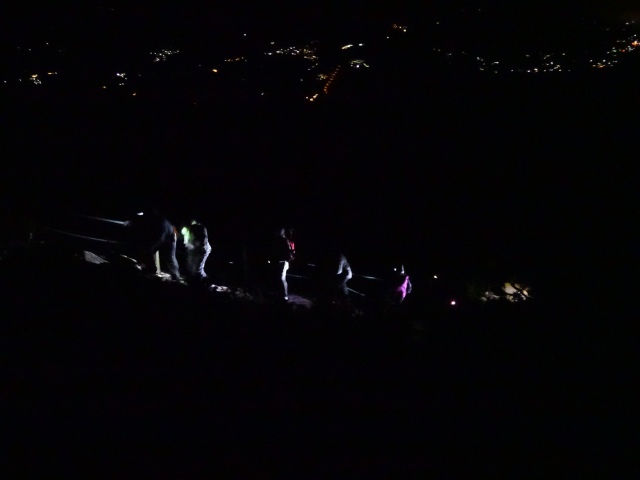 We got through the checkpoint just after 4am, so easily ahead of schedule. The route is marked by ropes, but the scrambling is easy and we didn’t really need them. The parts that would be tricky include staircases, so the ascent was pretty simple.

As we passed the south summit, we realised that we would be on top long before sunrise, and would probably end up heading down the mountain before we saw the view from the top. So we found a few shelters out of the wind, and waited in them for a while to allow some time to pass. It was colder than we expected, which didn’t help.

We managed to time this perfectly, and we found ourselves on the summit at the moment that the sun peaked over the horizon. 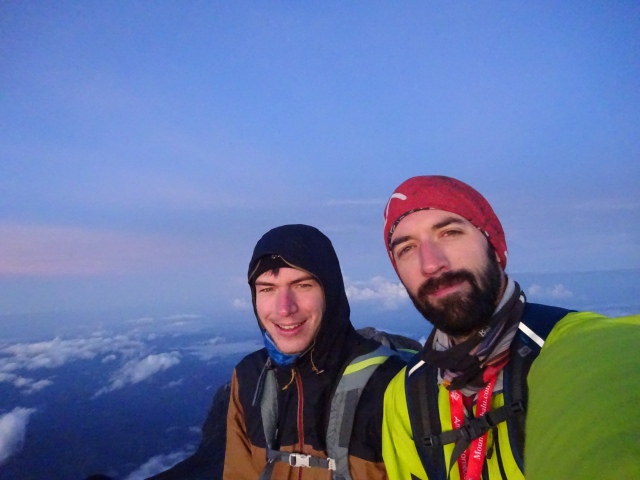 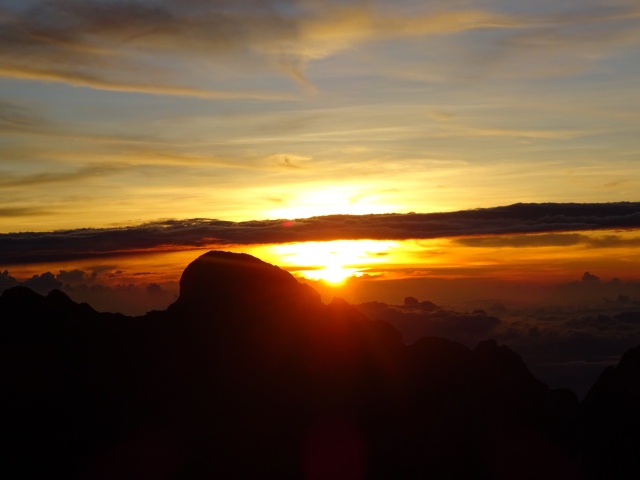 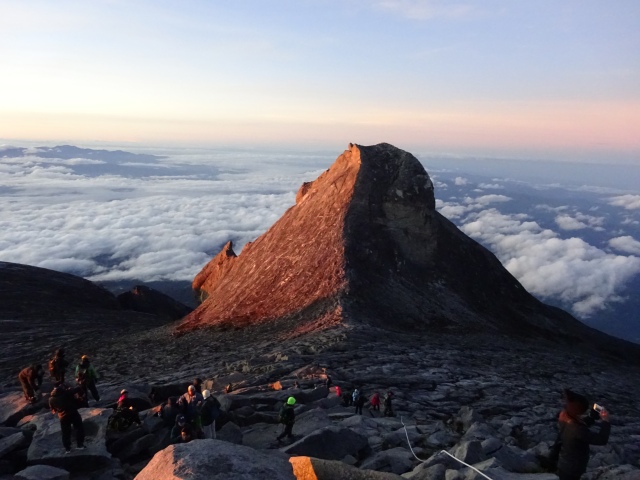 The summit is fairly gentle on the side you ascend, but has a sheer cliff on the opposite side. The valley below is very steep and loose terrain – and to the best of my knowledge has only been successfully navigated once. 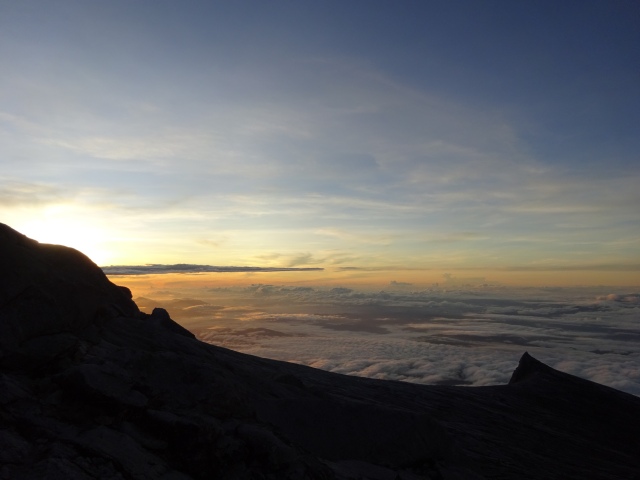 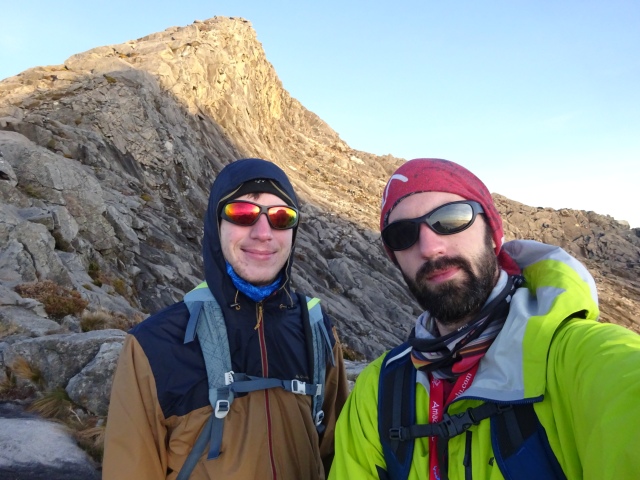 Mount Trus Madi sticking out above the clouds: 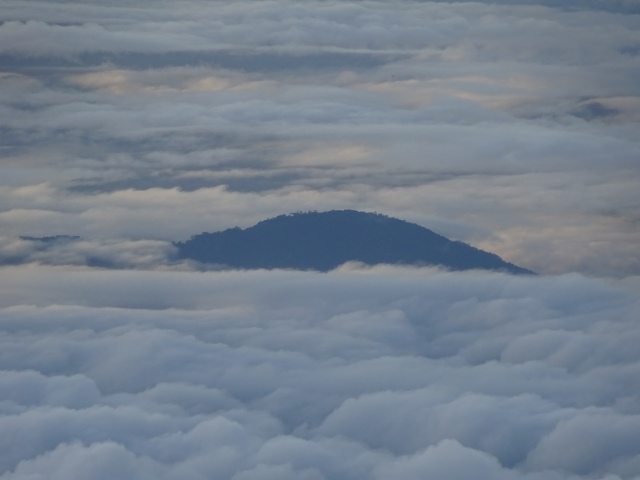 The summit is a mass of pointy rock pinnacles, and is actually really beautiful. 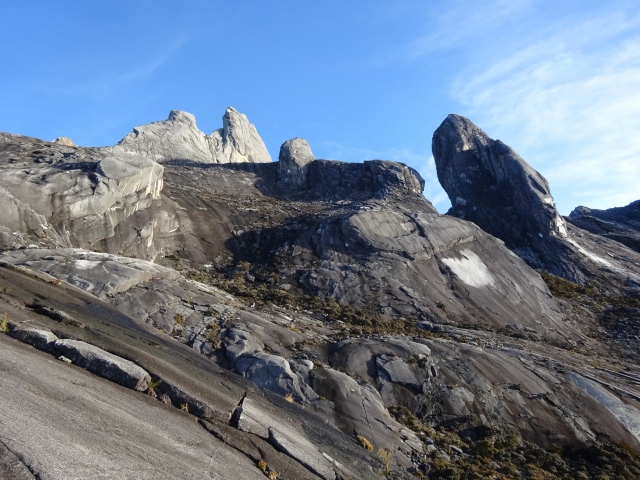 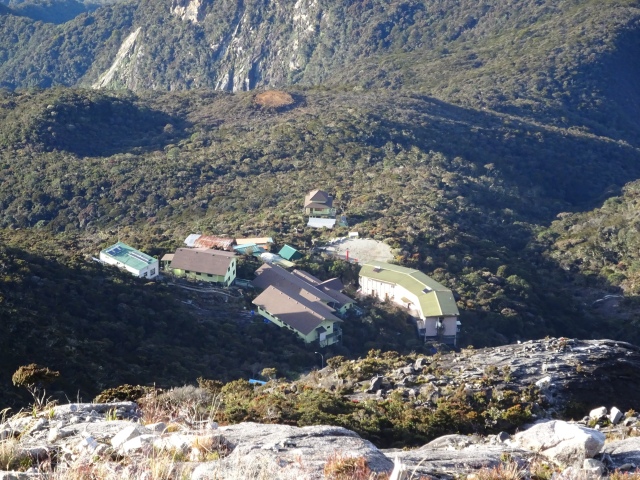 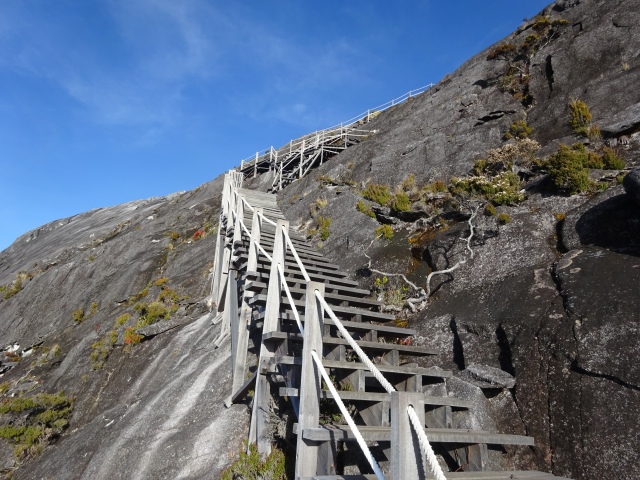 We made our way down to the hut at fairly good pace. You are supposed to leave your spare gear in you room and pick it up on the way down, but we hadn’t brought anything to leave behind.

We had our second breakfast before checking out. The food at the hut is really good and there is no limit to how much you can have – which is nice when you are hungry after a summit! 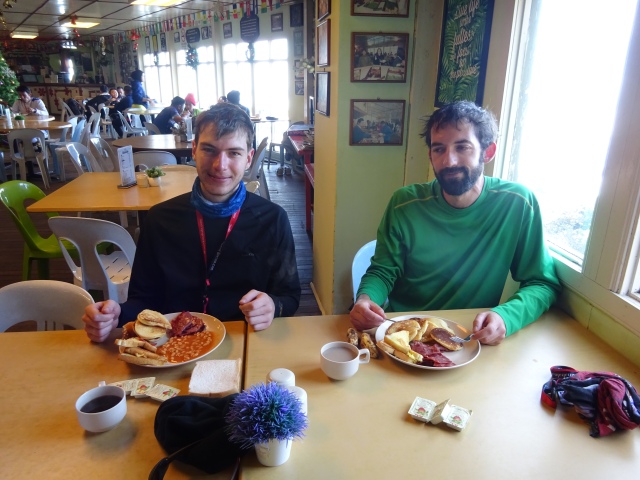 Descent went smoothly, with us reaching the end of the trail around 1:30pm. 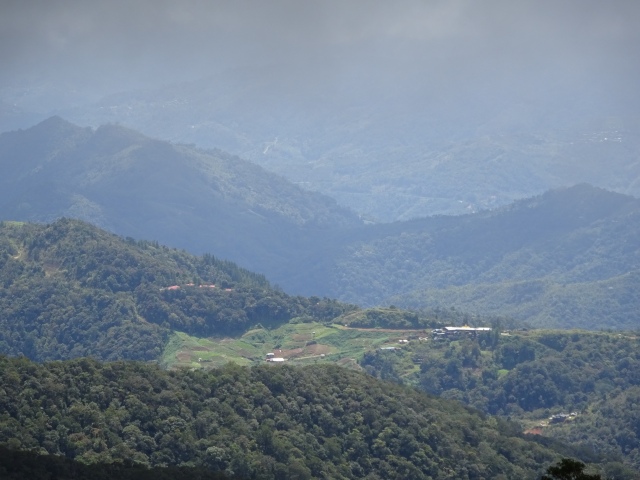 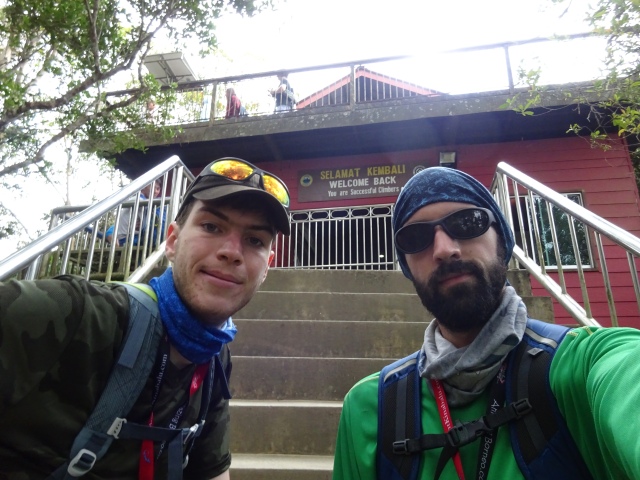 The package includes lunch at the end, which was another large plate of food. I had some more black pepper lamb – which was really good. So good that I have been trying to find a recipe since then!

After lunch, we were reminded that Borneo is home to large insects as the largest cockroach I have ever seen had to be removed from Matthew’s pack!

We were put in a taxi and taken back to Borneo Backpackers after lunch. As transport was included in the package, no extra cost was incurred with this.

Overall, I would definitely recommend Amazing Borneo and their logistics in climbing Mount Kinabalu. The mountain itself is amazing, definitely worth doing if you are in the area.

From a cost point of view – Mount Kinabalu was the most expensive part of my holiday (aside from flights), and yet the US$ cost of my 7 day ascent of Mount Kilimanjaro back in 2015 was more than my entire cost of my 28 day trip to Mauritius, Singapore and Malaysia. And, to be honest, I enjoyed Kinabalu more than I enjoyed Kilimanjaro. It isn’t the hardest mountain around, but it is a spectacular mountain.

The route itself isn’t particularly difficult, but I would not take any 4000er mountain lightly. Definitely worth doing, though.