Between a Rock and a Hard Place

This is yet another old hike report of mine. This hike happened in December 2016, and is probably still the funniest fail I have ever been involved in. But the hikes where everything goes according to plan don’t make for good stories!

On Saturday, Hobbit and I decided to take an easy chilled hike at Lotheni. A day pack is always nice for a pass with scrambling, so we decided to use Redi Pass.

We camped at Lotheni Campsite (I would say it is between Injisuthi and Lotheni for the best EKZN camp in the Berg). We scouted the turnoffs for the next morning, but decided it is not best to take a trail we don’t know when it is dark. 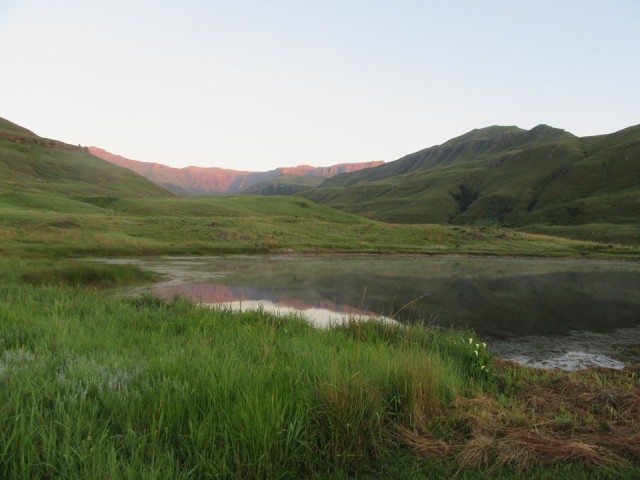 So at 4:30AM we were up, and at 4:50 we were walking. We started out on the Yellowwood Cave trail, breaking out to the south after about 3km. After negotiating a labyrinth of trails, we eventually found a turnoff marked “Hlathimba/Redi”, and took it. 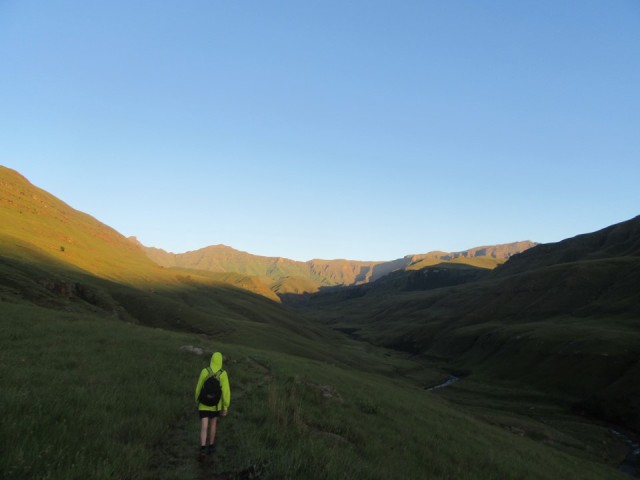 We stayed true left up the pass. The river was flowing nicely, which was great on such a hot sunny day. 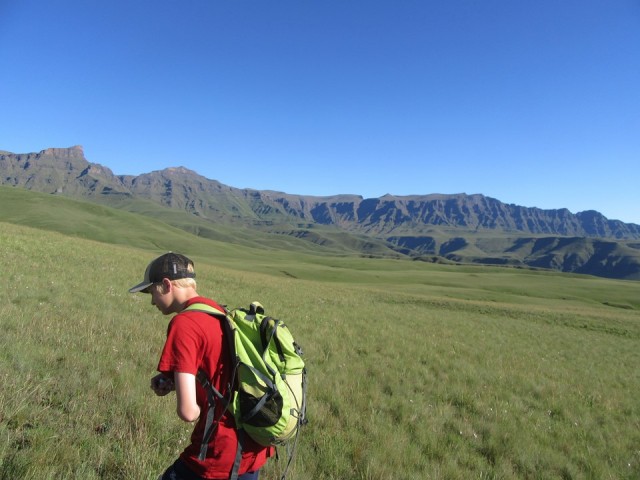 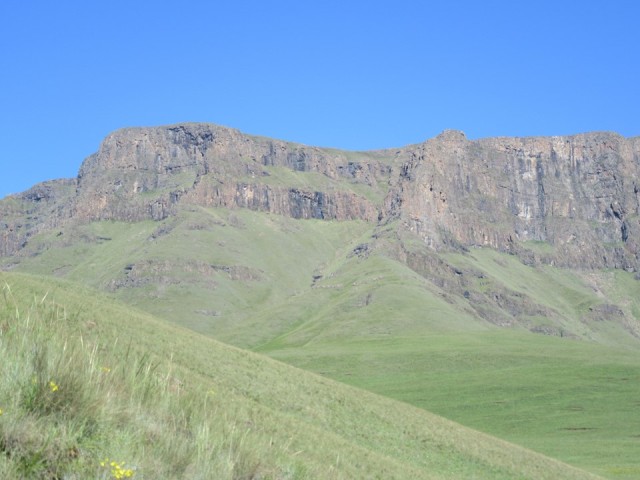 We eventually hit the “scramble”. It is a joke to call it a scramble. You walk to the base of the chockstone, then walk along a flat ledge, walk up a few steps and then turn around and walk on another ledge that comes out above the chockstone. You barely even need to use your hands, and unless it is iced up, you can probably do it with a full 20kg pack.

There is a big drop near you in places, but the ledge is so wide that you can easily have both feet next to each other for almost the entire “scramble”.

The hardest feature of the pass is the steepness, it is not a fast pass. But there is nothing technically difficult about it, e.g. Corner Pass is easier by exertion but harder in terms of scrambling. 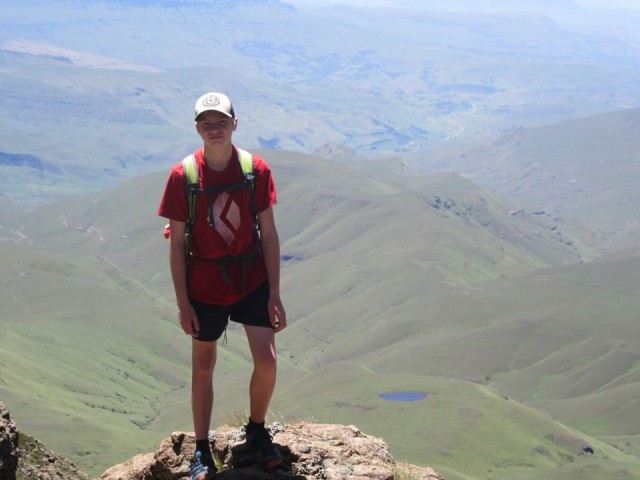 We slowly made our way from the top of the pass (2980m) to the trail below Redi Peak (about 3200m). We stopped for lunch below a cliff band, and had a chat with some very friendly shepherds. I suspect we would have given them less food if we knew how the day would end!

Our main goal on the trip was to bag Lithabeneng. Murch put it on the original khulu list, even though the summit is clearly not in SA. On the GT last year, myself and Hobbit bagged the SA summit – which has about 5m in prominence. Seeing as this may be a khulu bagged with a * next to it, the goal was to eliminate ambiguity. 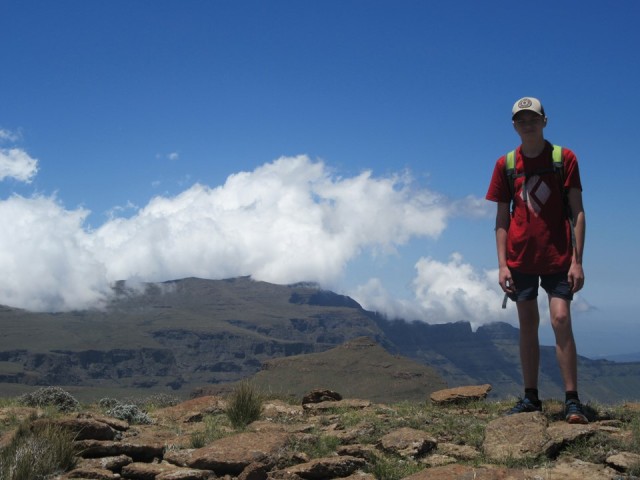 Anyone who knows Lotheni will know that KaMasihlenga Pass is the obvious route to use, but we decided to head up Redi Pass instead. It is great to leave the easiest pass in an area for later – so we decided not to use it as a descent route either.

We sat for a while on top of Lithabeneng – with some dogs barking at us, and a large cliff between us and them.

As we dropped off the peak, he had to threaten the dogs with rocks, but they didn’t get too close, so no worries there.

We dropped down towards the river in the valley – a substantial and steep grassy bank.

It had been a hot day, so we sat with our feet in a river for a while.

We reached the top of eNtubeni Pass – a pass we knew very little about, but you can see straight up it from Lotheni Camp – so we knew there were no gremlins hiding there. A certain popular Berg guide book describes the pass as having technical climbing, but being easier than Lotheni Pass – this is one of the most inaccurate descriptions of this route! It is definitely steeper than Lotheni Pass, and neither has any scrambling at all, being grass the entire way. 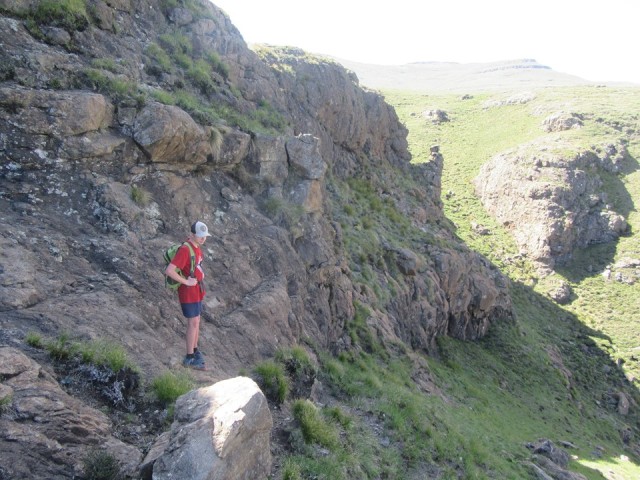 We found a nice cave right at the top of the pass. No signs of use, and the roof is very high, but most certainly not the worst cave around. Further down the pass we saw a very good looking cave that required a bit of a scramble to reach.

The pass itself has some scree in the grass, but navigation is easy with grassy spurs on either side of the gully. We opted for true-left, but true-right or the main gully would go just as easily.

The pass must have the most consistent gradient I have ever encountered. It is steep, but very consistent.

The bottom of the pass has a lot of long grass and vegetation. Hobbit had picked up bad sunburn, and was struggling with the grass on his legs. 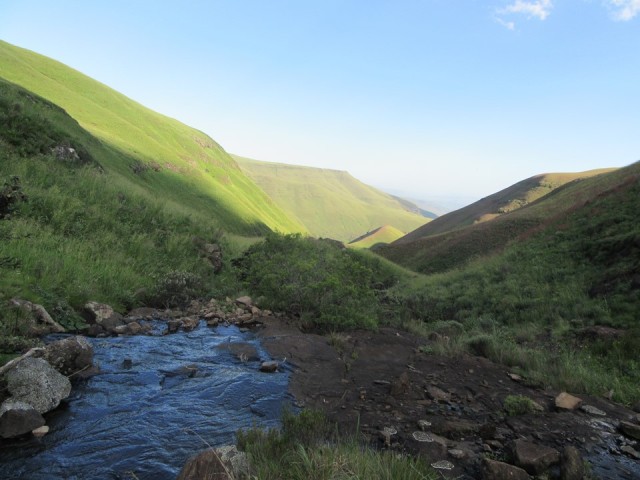 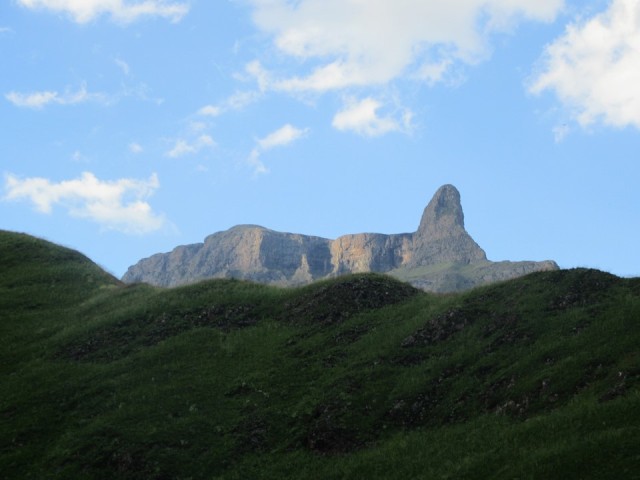 The map shows that you have to go over the obvious saddle at the bottom of the pass, rather than trying to follow the river the entire way down to the Lotheni River. We tried to follow the river on the pass, but after about 500m, we realised why the map shows the route it shows, and soon found ourselves slogging back up and over the ridge. Large waterfalls are formidable obstacles!

The descent to the Lotheni River is exceptionally steep – far steeper than either pass, and the time lost to sunburned legs had cost us a lot of time. It was about 6:30PM now. I knew that the only action for bad sunburn was to get Hobbit’s legs into cold water – and you don’t want to be cold when it gets dark, even if it is a nice warm summer day – perfect weather actually.

After 10 minutes of Hobbit keeping his legs in a rock pool, we continued down the river. We had come down Lotheni Pass earlier in the year, so we knew the trail was sporadic at best. We managed to push hard to reach Ash Cave by sunset. I walked up to the cave trying to find the marked trail on the map – no luck. 8km to the car park, no trail, new moon and having to follow a river by headlamp – this would be a long night!

Now we hit the part of the writeup that will have some of you thinking “Ghaz is an idiot” – but these kinds of occurrences are bound to happen from time to time when your focus is on exploration. I can play the rest of this scenario out in my head, but baring using KaMas Pass – I can’t see how this would have played out any differently if we had done things in an alternate way.

We agreed that we needed to find the trail – when we walked down the river, we kept slipping and by now our shoes were soaked. When we followed the banks, the overgrowth was really bad.

When we crossed the river, the GPS said 900m to Yellowwood Cave and 5km to the campsite – we were ecstatic, we knew how to find the trail, and we would get back quickly from here. It was 9PM, so we knew we would be back around 10:30. We had both eaten our last food, but the weather was still great.

So we began to climb the ridge, but no trail came into view. We knew the trail went high around the corner, so we tried to get to the high corner, and soon found ourselves above the cliff. We saw another cliff above us, and at this point I was starting to question this.

The terrain was much easier up here, although we were both getting cut to pieces by thorns. Hobbit was taking strain, and I had blood dripping down my legs – not idea for late on a dark night!

Our average pace was equivalent to a snail in peanut butter, and by 10:10PM, my GPS had said that we were only 4km from the camp now. When you take an hour to get 1km closer, you know the going is tough!

Around this time, our hearts sank as the rounded a corner and the world came to an end. I asked my GPS how far it was to Yellowwood Cave, and it was 1.1km away – and we were at the altitude of the cave. We guessed that we were above the cliff band of the cave, and knew we could take hours to reach it. After Hobbit took a nasty fall just above the cliff – we agreed it was not safe to continue. We couldn’t see a way down the cliff band, so we decided that an unplanned bivy was the safest option. It was a nice warm evening and it was 10:40PM.

We didn’t have much space, but our spot was flat enough and we had a large rock between us and the cliff. So caught between a rock and a hard place with very minimal gear, we stopped for the night. 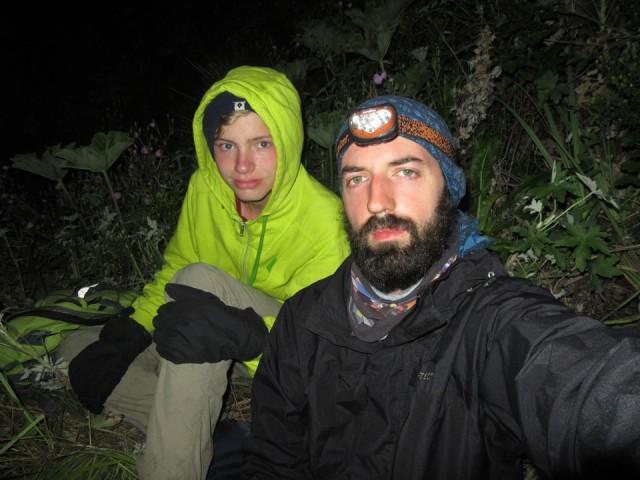 Considering the hard, unflat, bushy ground, it was surprisingly comfortable and we both got a bit of sleep.

At 4:15 this morning, as it began to get light, we packed up and got the first view of the trail we had been looking for – it was a good 100m below us on the ridge on the other side of the valley. 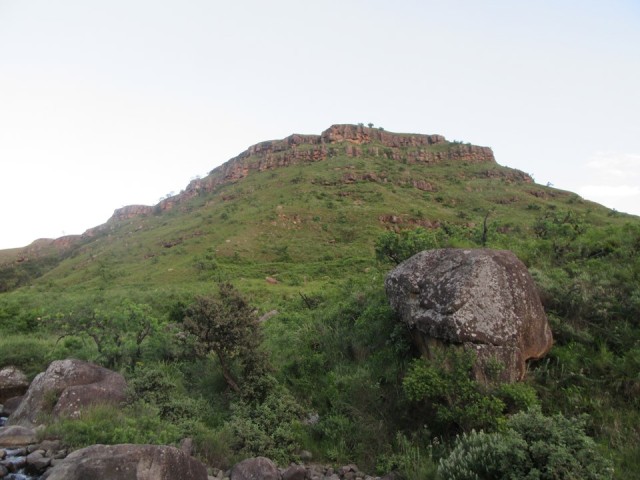 We were stuck between the two rock bands at the top of this ridge. It looks easy to get down in day light, but with a headlamp it was very difficult to spot.

We found a gap in the cliff about 5m from where we slept, and descended a very steep grass bank to hit the river below. From there we slogged up, found the trail we had been looking for the night before, and then made quick progress back to the camp, which we reached at 5:45AM.

Funny enough, we both agreed it was a great hike.

All things considered, the hike went very well. Funny to say that about a hike with an unplanned bivy!

Some extra notes in retrospect

My mother had been asking me to take her to Lotheni for ages. So I decided to take her along that weekend. Needless to say she was super worried about us not returning, and was very happy to see us early on Sunday morning.

Shortly after this trip, Mike and I went road-tripping with Andrew to the Eastern Cape and picked off the last few non-rock climbing khulus I hadn’t done. Mike and I went on to complete the Double Traverse about a month later. Definitely one of the most epic periods of hiking I have ever had.

As for the route – two factors caused our problems, and are easy to fix in retrospect, but were not so obvious at the time. Mike’s sunburn slowed us down a lot, so long pants or more sunscreen – that is a pretty basic error and easy to fix. But the main place where we lost time was the ridge between the rivers – if we had trusted the map, we would have not wasted all that time messing around in the wrong valley. But the maps are so frequently incorrect, and we didn’t have much information about the route – so hard to say what we should and shouldn’t have done.

I doubt I would do eNtubeni Pass again – it is a pretty average pass leading to a valley full of easier and more accessible passes, so not exactly the most practical route. But experience of things not going according to plan is always helpful in the long run.

I have spent a few nights in the mountains without proper sleeping gear, and this was by far the most pleasant of them. And also the source of the most jokes – it is really ridiculous to be stuck that close to the car park!